The Blurred and Defined Lines of Justice 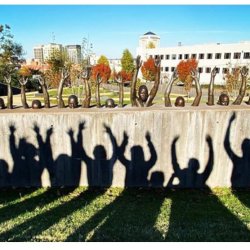 On Wednesday, January 6th, thousands of Donald Trump supporters marched towards the US Capitol in an effort to disrupt the democratic transfer of power to incoming President Joe Biden. When the mob of right-wing extremists arrived at the Capitol building, they proceeded with their orchestrated attack by pressing through security and eventually breaching the Senate chamber. Five people lost their lives in the chaos, while another died of suicide. Words have power and Donald Trump -- and anyone who uses them to incite violence and inflame racial tensions -- needs to be held accountable.

Whether it’s called a coup, an insurrection, or a domestic terrorist attack, one thing is clear: this was an act of white supremacy, as well as a clear display of white privilege. A predominantly white crowd carrying Trump flags, Confederate flags, Blue Lives Matter flags, and other symbols of white supremacy attacked our democracy in order to keep a white nationalist president in power. At the same time, the behavior of law enforcement was remarkably restrained when compared with their brutal treatment of Black Lives Matter protesters last year.

The attack on the Capitol was carried out by people whose vision of America is antithetical to everything GRID Alternatives Mid-Atlantic stands for: equity, diversity, and inclusion. We believe in a nation where the systemic inequities of racism are acknowledged and confronted, where the strength of diversity is celebrated, and where all people are welcome and included.

Last week, a Black reverend from Ebenezer Baptist Church, formerly the parish of Martin Luther King Jr., and a Jewish man who served as an aide for civil rights activist John Lewis, both won their elections in the southern state of Georgia. They won, in part, because they built a diverse, grassroots coalition and overcame voter suppression tactics intended to stifle the voices of people of color.

Any form of justice must include the demand for DC statehood. The lack of DC representation for its more than 700,000 residents has gone on long enough.  Please go here and make your voices heard.