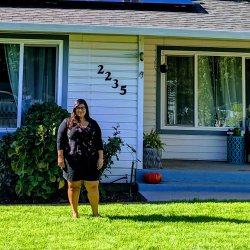 It was dark outside when Nakia and her sons, ages nine and thirteen, woke up to get ready for school on the morning of November 18th, 2018. As they drove to school, they looked up at the sky and saw what looked like snow falling.

It wasn’t until they pulled into the school that they realized the town was being evacuated. So, they rushed home to pack a few things and get their cats. Leaving their home for the last time, the air was thick with smoke and the ash was “raining down” as they saw the “flames and fire crews speeding past” them.

They found refuge four hours later when they finally reached Nakia’s brother in Gridley. For six difficult months, they shared a home with another family and then moved from “apartment to apartment” until May 2020 when they were able to move into a home of their own once more.

Nakia, who works at Enloe Medical Center, was struggling to adjust to the new house because of the high cost of utilities. “It has been really expensive. My PG&E bill has been about $400 a month, on top of our mortgage. That’s a lot of money for a little house,” she told GRID. “I was having such a hard time paying it.” Searching for relief, she found a link to GRID Alternatives on the PG&E website and contacted one of our Outreach Coordinators.

“I called Dan and it was an easy process!” she said. “I didn’t believe it at first. But If you believe in the process and believe what he’s saying, GRID is worth the time and the effort that an OC takes with each person. It’s beneficial for any family with a lower income to help with groceries and bills.”

“I also appreciate the workers coming out - the whole thing,” she continued. Their photovoltaic system was installed in November 2020, almost 2 full years after they lost their home. Only 4 months later, Nakia reports that their monthly bill decreased by more than half, fluctuating around  $100-190. “All the money we will be saving will be put into an account for the end of the year [True-Up] bill and whatever is left we can use for Christmas or a vacation!”

Nakia and her family love having solar. “Having solar is so wonderful!" she told us. "It saves us! It is better for the environment and it makes me feel safe!”

“We were soooo GRATEFUL to have had such a kind man named Alex Honnold pay for solar on our home [through the Honnold Foundation]! It was so incredibly kind of him; I will forever be grateful to him for his kindness and thoughtfulness! It makes you want to continue to help. After I heard,  I followed him on Instagram. He has a place where you can donate to other people to have it [solar]. I’ll be returning the favor so others can continue to have it [solar] too.”

Through this initiative, GRID NV has established community-serving collaborations with nonprofit and affordable housing partners. We have also delivered no-cost solar and energy storage solutions to 10 low-income, disaster-affected households. The goal is to save families money and promote positive health outcomes by ensuring long-term affordable energy, especially for seniors and those with medical electric needs. We have a pipeline of wildfire survivors who would greatly benefit from solar (and potentially battery storage) that the Honnold Foundation’s support allowed us to get started on, but we are still fundraising to meet this need. If you can offer even $5 to support this initiative, it would go a long way!