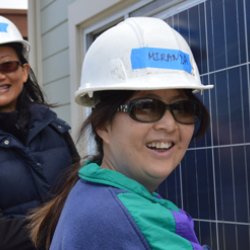 Over the past month, 23 members of Sunrun’s Women’s Network traded their desks for rooftops and their computers for power tools as they worked with GRID to bring solar to three families in their local communities!

In Richmond, California, five Sunrun women spent a breezy June day installing solar for the Orellana family. Jose Orellana has been in the roofing business for over 20 years, and recently started his own business to support his family. He even re-roofed his own home, and was proud to see it topped with a brand new solar system, which will save his family over $19,000 during its lifetime. The Sunrun volunteers were equally proud to take part in the installation, while also shining a spotlight on women in solar.

"Moments like this are important to me,” said Miranda Chook, who participated in the project. “In various stages of my career, I kept hitting that glass ceiling, so it's nice to see companies that sponsor awareness and support in advancing women in leadership roles. It's also very cool that our CEO is a woman too!"

Meanwhile, in Denver, eight more Sunrun volunteers were making progress on a 40-kilowatt solar system for Sanderson Apartments, a 60-unit permanent supportive housing facility aimed at ending homelessness in the community. The solar that Sunrun participants helped install will reduce energy costs for the facility, and generate over $275,000 in long-term savings that can be used to provide healthcare and other supportive services to tenants. 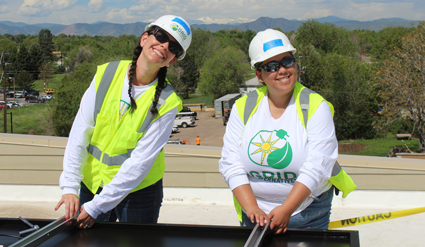 Members of Sunrun’s Women’s network--and a few male colleagues--also came out to volunteer at GRID Central Coast’s Solarthon on May 20. Volunteers helped to install solar for the Rubio family in the Atascadero Triangle neighborhood, which can now look forward to over $43,000 in energy savings throughout the lifetime of their new solar system.

Sunrun volunteers were thrilled to participate in all three projects, learning some new skills and bonding with co-workers, all while contributing to a brighter future for local families and the planet.

“I came out today to be outside, to see what our installers do every day, and to help create a planet run by the sun,” said Briana Corbett.

Click here to learn more about GRID’s all-women installations and our Women in Solar Program.