Martha Lorena Torres Espinoza lives in Agua Fria, an off-grid community in Matagalpa, Nicaragua. In 2012, she began selling solar lamps in her community through GRID Alternatives' Solar Lighting Program. As a Solar Saleswoman, Lorena has created an additional income source for her family while providing an affordable and clean lighting source for her neighbors. 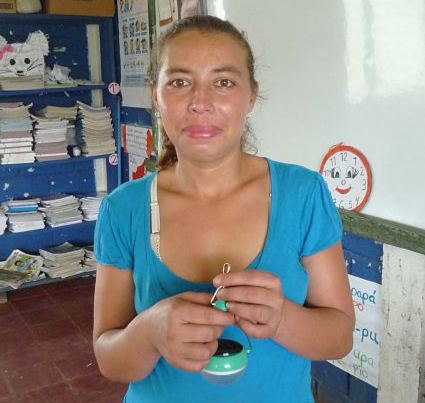 Martha Lorena Torres Espinoza (who goes by the name Lorena) lives in Agua Fria, a rural community in Matagalpa, Nicaragua that is 8 kilometers from the electrical grid. She is 34 years old and the mother of three children, ages 4, 8, and 14. Lorena has always been a very engaged member of her community, collaborating with teachers at the local school to support educational activities and taking on various leadership roles within the community. Since 2011, when GRID Alternatives worked with the Agua Fria community to install an off-grid solar system on the local two-room elementary school, both Lorena and her husband, Ernesto, have been key members of the local Energy Committee.  Like many men in their community, Ernesto migrates to Costa Rica for several months each year for work opportunities in order to earn income and send home remittances to support his family. Ernesto and Lorena have taken responsibility for maintaining the school PV system and cleaning the batteries that store the energy produced by the solar panels, and have served as GRID’s main points of contact in the community over the years.

While access to electricity in the school brought light and opportunity to Agua Fria, the reality inside local households looked very different. Families still relied on kerosene lamps and battery-powered flashlights to see at night, two lighting sources that are both low-quality and expensive to replenish. Lorena saw an opportunity to empower her community through solar lanterns that would improve health and safety in their homes, while generating income to support herself and her family. 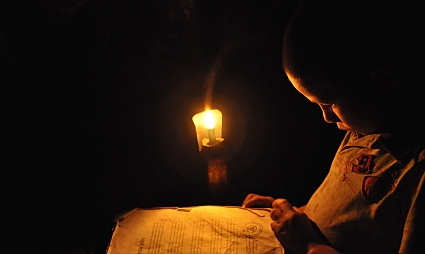 Lorena began selling lamps in her community through GRID Alternatives’ Solar Lighting Program in 2012. In addition to her roles in her household and community, Lorena has always been eager to learn new things and to find ways to support her neighbors. Her desire to try new things coupled with her willingness to take initiative made Lorena a great fit to be GRID’s first Solar Saleswoman. GRID Alternatives launched the Solar Lighting Program to provide high-quality affordable solar lighting solutions to families living in rural areas, while supporting micro-enterprise for women. A total of 13 women in 13 different communities have sold more than 610 lamps to date, helping displace kerosene and bring better and safer lighting to families living off the grid in Nicaragua. Lorena was GRID’s first Solar Saleswoman.

Lorena recalls, “I began slowly at first, but after people started using the lamps and seeing that they had good results I began selling more.” Being able to purchase solar lamps directly from their neighbor Lorena meant that residents didn’t need to spend time traveling long distances to purchase non-renewable energy sources from the nearest town. To date, she has sold more than 50 lamps in her community in addition to 20 in a neighboring community.

One of Lorena’s main motivations for selling solar lamps has been improving  the health and safety of her community. About 10 years ago, an Agua Fria community member and her 8-month-old daughter suffered severe burns from a kerosene lamp. The woman's husband was out of town working and she lacked the funds to purchase more kerosene in that moment, leading her to use paint thinner she had found in the house as an alternative fuel. Some of the paint thinner spilled onto her as she lit the lamp, and both the mother and her infant daughter were engulfed in flames. Tragically, the woman died after seven days without receiving proper medical attention, but her daughter survived. The community’s first-hand experience with this tragic accident gave them little hesitation in investing in a solar lamp. 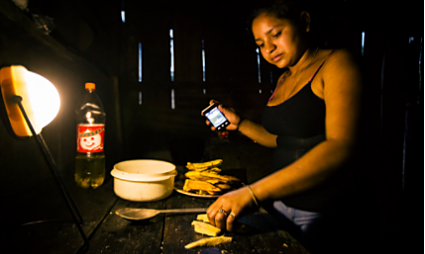 For each solar lamp she sells, Lorena earns about $4, which is a valuable source of income in rural Nicaragua, where many families live on less than $2 a day. She has utilized her income to purchase food and school supplies for her two children. “I like selling lamps because it’s a win-win: it helps me earn an income and at the same time it helps the people in my community,” says Lorena. The lamps Lorena sells can produce light for up to 45 hours on one day’s charge. Access to safe, quality lighting has made an enormous impact on even the smallest of day-to-day tasks in Agua Fria, such as washing clothes. Since the community does not have a local source of potable water, women and young girls must carry clothing 1 kilometer down a steep cliff to wash every morning at 3am. Now Lorena claims, “It’s almost as if there were electricity, because about 6 or 7 women bring their solar lamps and we wash clothes with plenty of light.”

In December 2016, grid electricity arrived to Agua Fria, bringing unprecedented energy access and stability. Yet even with electricity in their homes, many residents continue using their solar lamps that have withstood more than five years of daily use. They can be assured that whether or not there is stable grid electricity, they will always have a way to light their households. 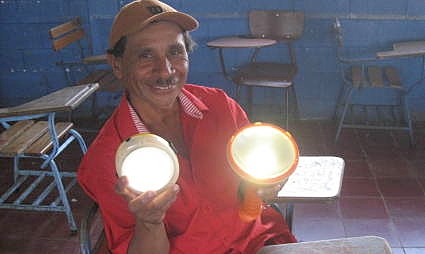 To make a donation to GRID Alternatives in support of our Solar Lighting Program and renewable energy projects in Nicaragua please click here.