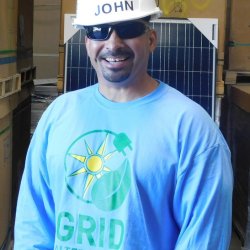 Working in the volunteerism department at GRID, it brings me great joy to see a volunteer take what GRID has to teach them and use it to land a great job. One they can be passionate about and proud of, as well as earn a good living for themselves and their families. Even better is when GRID receives the great benefit of finding a star volunteer who can contribute to GRID as a staff member and a wonderful addition to GRID’s family.

John Cervantes felt like he was at home the minute he sat down to attend his volunteer orientation only three months ago. In three months John volunteered on 39 installs. Though he never expected or even imagined being hired by GRID, he treated every second he spent on the installation site as if it were his own job, taking pride in the tasks he performed. In addition to the outstanding abilities demonstrated by John, he has also shown an amazing work ethic and an eagerness to learn everything the Solar Installation Supervisors had to teach him with great enthusiasm and fascination.

After 20 years of working various jobs in construction and HVAC, John was in search of something new and inspiring.  Lead to GRID by a local job training partner, and possibly by fate, John was excited for the opportunity to learn about solar installation while giving back to the community.  His passions for helping others and solar technology were combined into one job that John describes as “unbelievable.” John is excited about his future plans to volunteer on installs in Nicaragua and other off-grid communities, describing how much he would love to bring something as important as power to a community of people who have never experienced the things we take for granted and consider everyday commodities such as hot water. “To see the look on their faces would be priceless,” John says with radiant enthusiasm.

John has always been fascinated by solar technology, even in its primitive stage. Along with many of us, his first encounter was in elementary school with the basic calculator that had a built in light sensor. John found this fascinating as a kid, and his intrigue has grown in to a passion as solar technology has evolved, becoming more prevalent. John’s passion is perceptible when he speaks about his dream of an environmentally conscious, green society. “The sun produces so much energy in one day that If we were to harness all of that energy, one day of sun would produce way more energy than the earth would ever use or need to power it up. That is what I find totally mind blowing. I can’t believe that politicians and other people involved that are in it for the money can’t just get on board and push solar as far as it can go that way we can be a totally green planet and reduce dependency on fossil fuels,” John says demonstrating a devotion to GRID’s mission of protecting our beautiful planet.

John expresses gratitude for the opportunity to volunteer and learn with GRID. John says he never expected the chance to work for the company that trained and inspired him, and his astonishment and appreciation translate in his demeanor. John says he is amazed by GRID’s culture, never having experienced employment with such pleasant staff members stating, “Every person I meet here is nicer than the last.”

Impressed by the high standards for safety and efficiency of GRID’s construction staff, John found it refreshing to learn how much GRID values the lives and well-being of all staff and volunteers, stating that this is the first company he’s worked for where his safety was truly taken in to consideration. John says that safety and efficiency are the most important things he learned from GRID’s construction staff. John appreciates GRID’s dedication to efficiency and likes being part of a team that works toward perfecting the job initially.  When asked what he would say to someone who is considering volunteering and training with GRID, John stated, “You are learning from the best and giving back to society by helping someone in need.” Coming from a construction background he recommends, “Drop everything you think you know about construction and learn what GRID has to show you. Learn how to do things safely without taking shortcuts. Learn as much as you can from GRID’s construction staff.” GRID Alternatives is happy to welcome John Cervantes and also grateful for the wonderful things he has to say about the company and staff.