With the installation of a 15.75kW ground-mounted solar microgrid in the village of Dhapsung, Nepal, community members regained access to electricity after the earthquake destroyed their community's hydroelectric plant. The microgird provides reliable electricity to 42 households in the village, the elementary school, small businesses and street lighting. Positive outcomes were seen in the community in the areas of health and safety, education, economic development and quality of life. 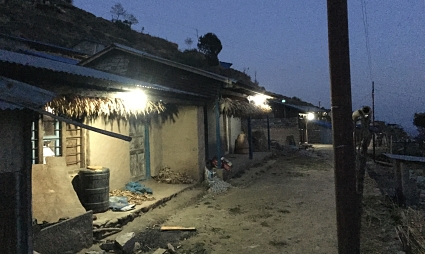 Perched on a mountainside to the northeast of Kathmandu, Nepal lies Dhapsung, a small off-grid village home to 200 Tamang people. Community members in Dhapsung depend on agriculture for a living. They grow millet, corn and other crops and dry them at home, then walk two hours to the nearest grinding mill to process them. Families also have water buffalos, cows, goats and chickens. Many families have at least one family member working in the Middle East or India in hotels, as cab drivers, or on construction sites who send back remittances to support their families. Dhapsung is the last permanent human settlement in this watershed of the Sindhupalchok district. In the rainy season, it takes four hours to drive then another four hours to walk on dirt paths to reach the village from Kathmandu.

The residents of Dhapsung have no access to electricity from the national electric grid due to the village’s remote mountainous location. The village had a 3kW pico hydro system that powered basic lighting but it was completely destroyed in the 2015 earthquakes. After the earthquake, nonprofit Digo Bikas Institute (DBI) installed a small DC-only solar nanogrid bringing lights to the homes in the village, but the system was very limited with little capacity for growth and did not provide AC electricity to the homes. Before the pico hydro plant, villagers had small solar lights called solar tukkis and burned kerosene lamps, pine wax and pit fires to light their homes during the night.

In April 2015, Nepal experienced a major earthquake that killed 8,669 people, injured 16,808 people, and destroyed approximately 288,793 buildings all over Nepal. Sindhupalchok was one of the most affected districts in Nepal with 3,660 reported deaths, out of which 12 people were from Dhapsung village. Almost all of the houses in Dhapsung that were made from mud-stone walls and slate roofs in the village were turned into ruins.

After learning about the village's need for reliable electricity from local partners Gham Power and DBI in Nepal, GRID Alternatives launched a campaign called Power up Nepal to raise funds to bring a microgrid that would provide the entire village with reliable AC electricity to Dhapsung in 2016. 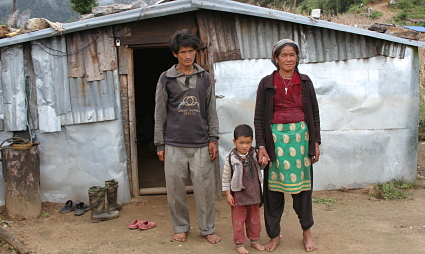 In September 2016, GRID Alternatives staff and volunteers installed a 15.75kW ground-mounted solar microgrid in Dhapsung together with Gham Power, DBI, Beyul Travel & Treks, Nepal Wireless and village members. After the devastating earthquakes, the microgrid came as a welcomed surprise to the villagers who were mourning the death of their family members. People were excited and ready to contribute anything they could to support the project. After many community meetings and conversations with all the stakeholders, the project was ready to be installed.

Gham Power and GRID staff led the system installation with 10 international travelers who learned about installing a microgrid, the importance of sustainable development practices, and Nepali culture. Digo Bikas Institute took the lead with facilitating community dialogue, business training for the Women’s Group who would manage the income from the microgrid, and explored small business opportunities with the residents to generate more local income. Nepal Wireless installed a wifi tower near the village for remote system monitoring, and Beyul Travel & Treks managed logistics for the volunteers during and after the project. Nonprofit Empower Generation was hired to train women how to sell solar lamps to nearby villages.

Community participation before and during the solar installation was essential and included digging of holes and erecting the power poles, carrying industrial leadacid batteries, solar panels, and power poles to the community, preparing a welcome ceremony for the installation group, and being available to answer questions during the project.

The solar system was designed to provide reliable electricity to 42 households in the village, the elementary school, to provide street lighting, and to power a grain-mill and a carpentry shop in two of the homes. A major assumption GRID and partners made before installing the microgrid was that community-level microgrids are only financially viable if there are productive end use customers paying into the microgrid, and that if houses are only paying for lighting that does not provide enough income to maintain the system over the long-term.

Each of the 42 homes were connected to a pre-paid pay-as-you-go Sparkmeter that was mounted on a power pole. These smart meters allow the system to limit the amount of daily kilowatt-hours each house uses to 3 kilowatt-hours to ensure the battery bank does not go below 50% depth of discharge in order to prolong the life of the battery bank. The smart meters were also programmed to limit the instantaneous demand at each home in accordance with the inverter sizing to ensure each house had a reasonable amount of kilowatts they could use at one time while ensuring the total demand from the village would not exceed the inverter’s capacity. The system was designed so each home pays Nrs100 (approximately $1 USD) per month for a max load of 200W at one time. Homes with heavy loads can pay more for higher demand and higher daily kilowatt-hour limits. The internet connection from the wifi tower was to allow GRID and Gham Power to remotely monitor the system through both the smart meter software and the inverter software to ensure the system is working optimally and the monthly payments are being made.

Following sustainable development practices is a key part of GRID’s work in Nepal. Strong community involvement, working with local partners, smart solar system design with high-quality components, and ensuring there is a plan for long-term operations and maintenance are essential to ensure the solar system creates its intended impacts for the village. The Dhapsung microgrid was designed to create an ongoing income stream from the community through pre-paid monthly payments to ensure that components can be replaced and maintenance can be performed by a local solar company when needed.

Before the solar installation, DBI worked with the village to form a Solar Microgrid User Committee (SMUC), comprised primarily of members that were already part of an existing legally registered Womens’ Group, also known as “Mothers’ Group.” The Women’s Group is made up of approximately 40 women from the village, including an elected leadership council of 13 women. SMUC’s main role was to assign two people from the village, one woman and one man, to collect the monthly income from the microgrid, and then SMUC stores the funds and uses them as a revolving micro-finance fund for local community lending until the funds were needed for system maintenance. The two system operators were to receive a part time salary and were trained by Gham Power to operate the microgrid which included learning how to collect monthly payments from families, enter the data into a computer, and perform basic system battery and solar panel maintenance. 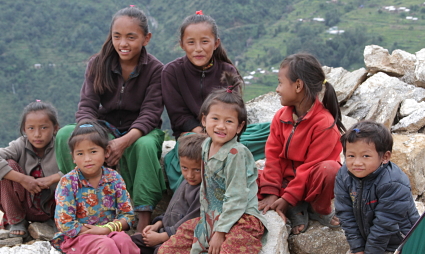 GRID staff has kept in constant touch with the community, visiting at least once every six months. The following impacts were observed or described by the community since the project was installed three and a half years ago:

GRID and partners learned a lot by working with the village of Dhapsung during this project. Below is a summary of some of the key lessons we have learned so far:

Dhapsung has been able to see significant quality of life improvements due to the presence of reliable electricity. Since there is still capacity in the system that is not being used, residents continue to work on other ways they can use electricity to improve their village. They plan to pump water to irrigate a cardamom plantation during the dry season and then use an electric roaster to roast their cardamom rather than using a wood fireplace to roast the spice. Other residents have discussed using electricity to power electric sewing machines, a printer for photos, a food sealer for dried mushrooms, and using electric wood saws to make and sell furniture; all of which are possible with reliable electricity from the solar microgrid. 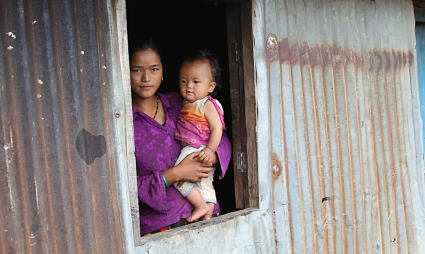 View a downloadable PDF of this case study here.

You can see photos from this project here.

To make a donation to GRID Alternatives in support of our work in Nepal please click here.