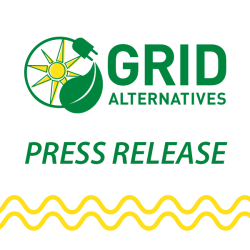 OAKLAND, CALIFORNIA - December 16, 2022. Yesterday, the California Public Utilities Commission voted to approve the final version of the state’s updated net-energy metering proposal (known as NEM 3.0). GRID Alternatives appreciates the Commission's deliberation and is relieved to see the recognition that more environmental and economic justice communities deserve a fair shot to benefit from rooftop solar and storage. The final decision extends a moderately higher incentive to single-family households in disadvantaged communities and to tribal families living across the State, and is an improvement from the proposal issued in November, which would have provided assistance to fewer Californians. However, the incentive in the final decision did not go as far as to provide support to families that make less than 80 percent of their area median income (AMI), which is disappointing to many communities of concern across California and is inconsistent with the CPUC’s own definition of environmental justice communities. While families making less than 80 percent AMI  will have access to some income-based incentive programs through the Inflation Reduction Act, they will also have the most difficult time benefitting from California’s net billing tariff.

GRID Alternatives believes that the final decision is gambling on a complicated incentive structure that uses a conservative estimate of project installation costs in order to achieve a targeted nine-year payback. It remains to be seen whether this approach will truly achieve more environmental and economic justice through clean energy. Nevertheless, GRID remains committed to bringing renewable energy to all communities by meeting families where they are and is proud of our partners that fought to keep virtual net energy metering (VNEM) unchanged. Two years ago, GRID noted that projects using VNEM were not included in the analysis of NEM 2.0 projects, and thus, reporting on whether NEM 2.0 was equitable was incomplete.

The notable changes of the final decision; allowing more environmental and economic justice communities to access a moderately higher incentive, and continuing to allow renters to benefit from on-site solar and storage is a clear improvement over November's proposed decision,  however, GRID remains frustrated that the decision is not as supportive as what was guaranteed in December’s PD. If California is to achieve its climate goals in a way that has a meaningful impact on the environment and for people, a one-step forward two steps-back approach will not suffice. As GRID has stated before, California needs more solar, not less. The state must advance policies that truly realize the opportunity for clean energy for all Californians.