In March 2014, GRID Alternatives led a trip to Nicaragua with volunteers to install an off-grid photovoltaic system on a primary school in the rural community of Charco Muerto. This community sits on a white sandy beach on the edge of Lake Nicaragua and is perched on the southeast end of volcano Mombacho. The community consists of 50 families and has a population of about 300. 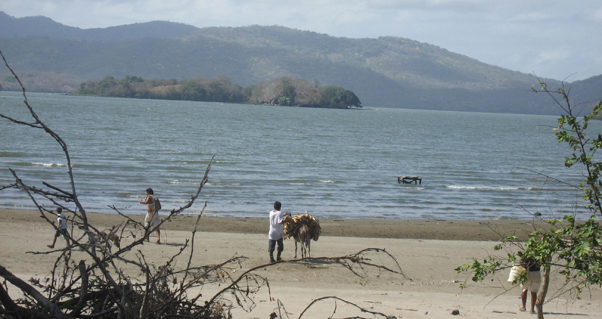 Despite the beauty of its surroundings, the residents of Charco Muerto struggle to survive on a daily basis. Most families rely on subsistence fishing, however the supply and quality of fish has been decreasing and the sandy soil can only support a limited number of crops. The Union of Agricultural Cooperatives (UCA) has been trying to improve the economic situation of the community through developing a community-based tourism project, providing agricultural assistance, and offering educational opportunities for students and community members.

In 2009, Charco Muerto was formally incorporated into the Union of Cooperatives and given the name “Claudia Chamorro No. 2.” The total cooperative owns 1,211 acres of land that was originally owned by one family but was seized by the Sandinista government in 1979 and parceled out to the local landless peasants during the period of land reform.  Despite the small advancements that Charco Muerto has made over the last several decades, the lack of access to electricity limits its development.

Most residents rely on flashlights to light their homes in the evenings. Families spend C$60 (U$2.45) monthly to replace disposable batteries twice a month. Every house in the community has an average of  two cell phones. Most residents turn on their cell phones using a set schedule for a few hours a day to communicate with their friends and family so that the battery can last for the whole week. To charge a cell phone, residents must walk to the nearest community (8km) or travel by bus to Granada, the nearest city, and pay C$10 ($0.42) per charge. 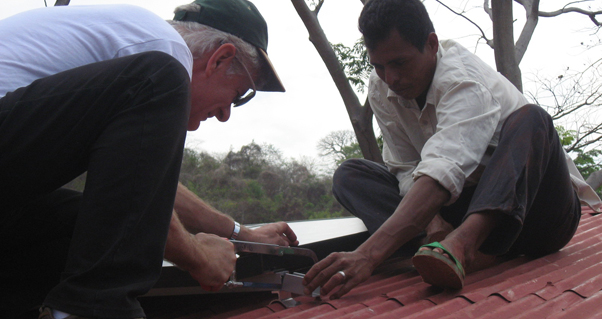 In the past, there were at least five car batteries in the community that were used to power homes, but the owners have stopped making the commute to Granada because it had become too costly. It costs C$100 (U$4.00) to charge a car battery, which includes the roundtrip bus fare to Granada. To put that into perspective, if the average family lives on less than $2 per day, then they would have to give up at least two days worth of food just to have battery-powered electricity in their home. UCA built a community house, orcasa comunal, where the cooperative conducts meetings which currently has a solar system.  Volunteers will have the chance to see the system and observe how the community is benefiting from the electricity at the community house.

The Los Cocos primary school was built by the community and funded by local NGOs and the New Zealand government. The two buildings consist of 3 classrooms total, an office space with library, and a storage area. The school has two full-time teachers and serves a total of 47 students (pre-school to 6th grade). There are an additional 15-20 students from the community that commute outside of the community to attend high school on Saturdays.  The teachers believe that having electricity at the school will help enhance learning opportunities by providing access afterhours to the small library it already has with books donated by local NGOs. The school is located in the most central part of the community and would be an ideal location for residents to charge their cell phones and appliances.

Access to electricity in this community will greatly improve the quality of life for residents because they would not have to travel very far to charge their appliances and use electricity. This resource would also improve the local economy because it would enhance the existing rural tourism project and attract more local businesses. The electricity provided at the school will improve the quality of education by giving children access to computers and research tools that they would otherwise not have readily available. The community’s cooperative is already well organized and has a committee ready to help with the installation and maintenance of the PV system.

Tourism and Cultural Activities
During this time of year in the town of Masaya celebrates the festival of San Lázaro in honor of the patron saint and protector of animals. People from all over the country bring their dogs dressed in lavish and comical costumes and parade them through the streets. It is also a perfect time to take a tour of the town’s largest market of traditional arts and crafts, pottery and textiles. Every Thursday is “Jueves de Verbena” in the town market where you will enjoy the traditional music, folkloric dance and traditional Nicaraguan cuisine. While in Charco Muerto, volunteers could take advantage of the community’s picturesque surroundings by participating in the tours arranged by the local community, which may include:  a nature hike up volcano Mombacho to see Pre-Columbian petroglyphs; a horseback ride on the white sandy beach of Casas de Tejas; or a boat tour of Lake Nicaragua with a local guide to learn about artisan fishing techniques.