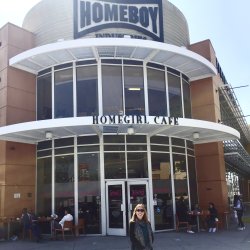 Homeboy Industries provides hope, training, and support to formerly gang-involved and previously incarcerated people. Each year over 10,000 individuals, from across Los Angeles, come through Homeboy Industries’ doors in an effort to make a positive change. They are welcomed into a community of mutual kinship, love, and a wide variety of services ranging from tattoo removal to anger management and parenting classes. GRID Alternatives has been one of Homeboy’s partners and supporters for over 10 years, providing solar installation training and employment opportunities within the solar industry. You can learn more about Homeboy Industries here.

GRID Alternatives sits down with Shanley Rhodes, Director of Career Pathways at Homeboy Industries, for a conversation about the re-entry space and the solar industry.

How did you come to be involved with Homeboy Industries?

Before I came to Homeboy Industries, I was working as a high school principal. I had a student who stopped coming to school because he was involved with a gang. It became difficult for him to attend school due to conflict from gang-related territories on his commute. I had a vague understanding of Homeboy and asked his mother if I could ask for their help, and she agreed.

The people we met at Homeboy offered him the alternative to attend their school instead. They were just starting to get the school off the ground, and immediately I felt that I had to be a part of it. I joined the Homeboy team shortly after.

We built that school from the ground up, starting with four students. The school now has its own site and over 200 students. In the meantime, I have worked in education as well as in vocational programs, but eventually found my way back to Homeboy where I am now Director of Career Pathways.

Can you give us an overview of Homeboy's mission?

We work with formerly incarcerated and formerly gang involved individuals to provide what we call “whole life pathways.” We are here to help people heal – healing through providing community, therapy, support, and stability. We provide stability through having childcare and housing options, or whatever the individual's needs are. We’re also here to help people go beyond the basics, to live out their dreams. We like to say that Homeboy is a place of a million chances. We never close the door on anyone, whatever their past looks like, no matter how many times they come through our doors.

What is the role of community in the healing of trauma?

Father Greg (founder of Homeboy Industries) uses the term “kinship” often. At Homeboy, we believe there is no “us” or “them,”  there is just “us.” Homeboy is a family in a way I've never experienced in another workplace. Everyone is together in the best way – a family in all the best ways possible. We talk about love all the time at Homeboy, how loving each other, being there for each other, and holding each other accountable in compassionate ways -- this is how we build community through mutual support.

It’s also important for us to understand that we each have our roles. On any given day, anyone can be the teacher of someone else. No matter our position, we all have things to teach each other and being open to learning from one another is key. Homeboy can be a very chaotic but fluid workplace, because we always default to peoples’ individual needs, rather than hold everyone to the same “standard,” whatever that means.

What do you hope people learn about rehabilitation work?

Everyone is fundamentally good. You’re already enough and perfect the way you are. You’re not the worst thing you’ve done. This belief plays out in the work that we do. It doesn’t mean that rehabilitation is easy or that there isn’t heartbreak from time to time.

Rehabilitation means always leaving the doors open and having the structured support for those who seek it. Rehabilitation is not always linear, just like how healing isn’t always linear. People need healing, they need the opportunities for education and meaningful careers. Most of all, they need hope – people who have hope make different choices, because they have strength through hope.

What has your partnership with GRID Alternatives been like?

Our partnership with GRID Alternatives has been crucial for us because of GRID’s solar expertise. GRID’s connection to employers has been so helpful for us in guiding our people through solar career pathways. Being able to extend their certification into an internship also helps our trainees. We always say that working with GRID is the difference between getting a job in solar or getting a career in solar.

Why is it important to make renewable energy jobs accessible to everyone?

I think all jobs should be accessible to everyone. Green jobs in particular are so important because not only is it a growing industry, it’s an industry that is actively making change for the better. You’re doing something important for humanity. You’re getting paid and you’re saving the world!

Representation in this industry is important because it should be understood that everyone can help the world move forward to a more sustainable future. Our re-entry population has grit and drive and the desire to work hard. They are ultimately going to be great employees.

Thank you Shanley for your time and insight, and thank you to the team at Homeboy Industries for the work you do and your continued partnership with GRID Alternatives. If this conversation sparked an interest in our work, check out this mini PBS documentary featuring a story from our partnership in 2019.