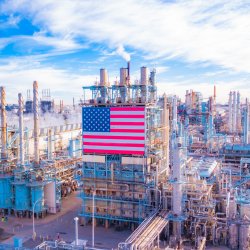 In the wake of climate disasters and social upheavals, it’s becoming more difficult to celebrate freedom in America. The last several Independence Days have been marred by unprecedented heatwaves and wildfires in drought-ridden communities, social uprisings against pervasive and systemic oppression, economic uncertainty, and a global health crisis.

The day-to-day grind of surviving a 24-hour bad news cycle for human rights and the planet is causing many, but especially women, trans folx and people of color to ask: if we cannot breathe freely without fear of pollution, move freely without fear of violence, and live in abundance rather than scarcity, can we really celebrate freedom?

For most people in this country, the reality is that freedom is an American aspiration, not an American reality, and July 4 is a better day than any to acknowledge it.

The world has been sold a story of American greatness, but people are showing up with receipts. America’s “greatness”  has been achieved through the exploitation of people and the environment. The stealing of Indigenous lands when settlers first arrived nearly erased centuries of life with the earth and land stewardship practices. The enslavement of Africans and Indigenous Peoples built a blood-drenched, extractive, exploitative economy that has almost destroyed the planet in 200 years. The United States’ disproportionate carbon footprint, as the second highest emitter of greenhouse gases globally, devastates the lives of nations who contribute the least to climate catastrophe.

For centuries, the US has led in contributions to the climate crisis and the injustices that accompany it. Most recently, the US has led the way in restricting and removing historically and constitutionally enshrined rights of BIPOC, women, and trans and nonbinary folx. Today’s reality is not an accident, it’s by design and woven into the framework of America, and that fact cannot be ignored if freedom is truly an American aspiration.

To achieve true freedom for all, the US can start by paying  domestic and climate reparations, at a scale to match the realities of today’s global racial imbalances. Philosopher and scholar Olúfẹ́mi Táíwò’s “constructive” approach to reparations proposes a project to build a better world, and demands that the costs of building that world should be distributed more to those who bear most responsibility for past injustices. This approach includes cash transfers to Black and Indigenous Peoples, and to countries with high debt as a result of US colonialism and imperialism. Canceling debt allows people the freedom to build back after climate disasters. Renewable energy allows people the freedom to go beyond an energy democracy, creating energy sovereignty.

We know that making bold changes for the better is an American quality, as demonstrated by American changemakers like Harriet Tubman, Dolores Huerta, Winona LaDuke and Harvey Milk. These are Americans worth celebrating on the 4th; the seekers of freedom. We also know there are important American values celebrated on July 4. Family, gathering in celebration, and even the right to paid holidays and weekends (thank you labor unions). While we acknowledge the importance of time spent with loved ones, we also acknowledge that it’s time to broaden the definition of what it means to celebrate being free in the United States of America.