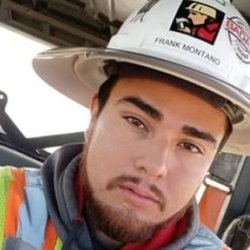 In July 2020, GRID Colorado hosted a two-week Solar Training Academy in Pueblo, sponsored in part by Lightsource bp. It was the first in-person training hosted by GRID CO since the beginning of the COVID-19 pandemic. With safety precautions in place, GRID CO was able to enroll six trainees in the program. One of these trainees was Frank Montano. Like many folks at that time, Frank was working through a number of personal obstacles—Frank was facing challenges in securing stable housing, as well as continued involvement in the justice system. Unfortunately, these barriers and others prevented Frank from being able to complete the Solar Training Academy at that moment in time. While Frank was interested and excited about the solar industry, he needed to find balance before he could fully commit to his career goals.

Fast forward to May 2021: Frank hears again about the largest solar array in Colorado being built in his hometown of Pueblo by McCarthy and Lightsource bp. This time, Frank is ready. He applies and lands a job on the monumental 300 MW Bighorn solar project. Frank exclaimed, “It was the best decision I’ve ever made. I not only have a job, but a life-changing career opportunity that I earned by proving I was hard working and deserving.”

With the financial support and encouragement of his employer, McCarthy, Frank began electrical apprenticeship courses in early October. For Frank, the future is now bright, contrasted by a past with a path that wasn’t always as illuminated. Frank said, “It’s crazy how life works out...thank you for introducing me to this field of work. I love it!”