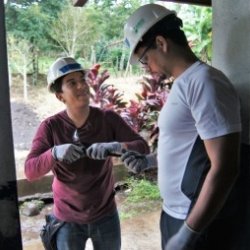 My name is Leandrus Torres and I’m 100% Nicaraguan. I’m 27 years old, born into a family without many resources though my parents succesfully became professionals despite the difficulty of the 1980s in Nicaragua. My father was an electrical engineer and my mother was a French teacher specializing in teaching kids. I have a brother that is 7 years older that is also an engineer like me but he is an electromechanical engineer.

I graduated in 2014 from the Universidad Centroamericana (UCA) as a Systems and Technologies Engineer with a focus in networks and telecommunications. Later, with some unpaid work experience in the field of systems, I started working with radio frequency systems and fiber optics, operating a national network for a prestigious international mobile telephone and internet company. I have always had an interest in working more closely with much needed development projects that help my country,  I felt like something was missing and I wanted to give back as a professional so I started to look for how my career can help in the development of my country.

Apart from information technology, I wanted something where I was more directly involved with people. That’s when I found renewable energy, particularly solar energy.  I read that many telecommunications engineers switch careers to solar energy since there are many similarities between radio frequencies and solar radiation, in addition to the principles of electronics that we acquire in telecommunications.  This motivated me to study solar energy so I took vacation time from my job to take a class organized by Grupo Fenix at the UNI in Managua. The week-long class was given by the co-founder of Skyheat and the grandfather of solar energy, the physicist Richard Komp. This guru of solar energy imparted so much experience and knowledge to us in the class.  I remember talking to his wife and she said that many systems engineers decide to work in solar energy because they are motivated by the desire to help others and the environment. This confirmed my passion for solar energy. 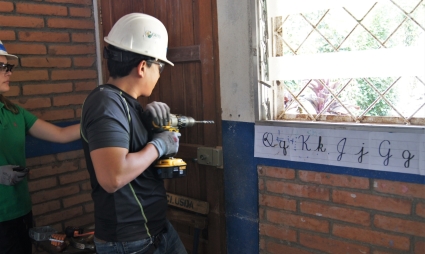 Later, after getting another job in my field, I looked for a job in solar with local companies, but they didn’t want to hire me because I didn’t have experience in the solar field. My new job was supervising a regional telecommunications network and had a good salary, but I felt that these achievements were still not fulfilling me professionally and personally. So I started my search for volunteer work related to solar energy in my country, knowing there are not many opportunities in Nicaragua. This is when I came across GRID Alternatives and I decided to apply online to volunteer. A bit later, I started talking with Roberto Tapia and this is when my lifelong experience with GRID Alternatives began, with Roberto continuing to support me as a volunteer both nationally and internationally.

I didn’t hesitate to take vacation time from my job so that I could volunteer with GRID in July 2017 to install a solar photovoltaic system on a rural school in the community of El Regadio in San Sebastian de Yali, Jinotega, Nicaragua. It was a decisive experience in my life, full of lumps in my throat, an experience where I interacted with a team that loves the same thing I love. The GRID team shared knowledge with me in such a humble and kind way. I also had the honor of sharing the experience with a farmer who taught me the pleasure of giving. He is such a giving person, a characteristic that can seem contradictory since giving is often thought of as people with money giving to others.  From this moment I knew I was going to stay connected to GRID Alternatives since their work fed the part of me that I wanted to feed.

Seeing the happiness of the people as well as the friendliness and humility of the whole work team and the farmer made me reflect on my life philosophy. Paraphrasing a little from the philosophical idea that’s in my head, my philosophy is, “It is a privilege to finish advanced studies and, being a privilege, it should be shared to benefit the majority (people lacking economic resources and with limitations to development) and not only the minority (making economically stable systems even richer), I firmly believe that life and happiness consists in sharing, in giving without waiting to receive, it's amazing how life is so generous, it gives you what you need and not necessarily what you ask for.” 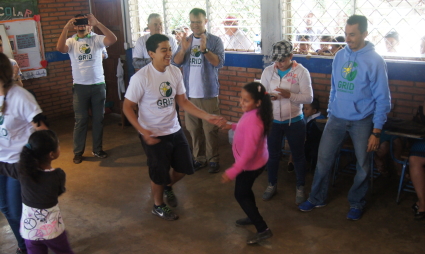 Later, I participated in a new project with GRID in February 2018, I asked for time off from my job and with much pleasure I joined the GRID team to install a drip irrigation system in the community of la Rinconada, in Concordia, Jinotega. It was on this project that I met Mr. Michael Kadish, Executive Director of GRID Alternatives Los Angeles, who kindly invited me to visit GRID in Los Angeles.

From that moment I started a more intense search to learn more about solar energy and about renewable energy in general. I should mention that since mid-2016 I was looking for scholarships internationally in this field. This search had ups and downs, in some universities I was accepted to study but not given a scholarship, in other cases it was the opposite, but I never gave up searching and I decided to keep trying patiently and to participate with GRID Alternatives since what I was really looking for was more than a certificate, it was to keep experimenting with solar energy and experiencing the satisfaction of helping others - there were days when I would wake up and see the sunshine and think about how there was energy being generated from that immense mass of fire.

At the end of 2018, the opportunity came up to apply for another scholarship and I thought why not? They say there’s no greater effort than that which isn’t made. It was for a scholarship to study renewable energy in France and I already had the requirements, including a B2 level in French since I studied my whole life in a French bilingual school since my mother was a teacher there. I also had experience in renewable energy from my volunteer trips with GRID Alternatives. I started the scholarship process and at the same time I received the first rejection for my U.S. visa. I decided to apply for the visa one more time, convinced that nothing could stop my first experience in solar energy outside of the country, this time with an invitation letter that Mr. Michael Kadish and Mr. Adewale from GRID provided me.

2019 arrived, a year with many professional and personal achievements. In February, the French Institute of Central America (IFAC) contacted me for an interview and after a short time informed me that I had been given the only grant for Nicaragua to study in France. However, the suspense hadn’t ended, as I still had to apply to French universities and see if they would accept me. 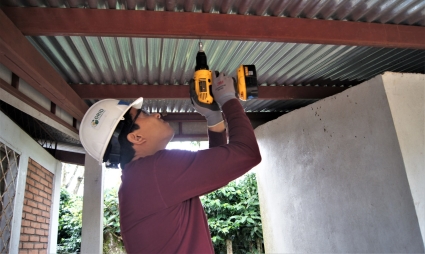 In March I was granted a U.S. visa and I planned my trip with GRID for May 2019. In April I was informed that I was accepted to three French universities and I chose one based on my country’s needs and the experience that I had with GRID, the Paolo-TECH University on the island of Córcega. They offer a Masters in renewable energy (solar, wind and geothermal) based on off-grid systems and project management in the transition from fossil to renewable energy, everything that my country needs and what many other developing countries also need. They informed me that I would begin studies in September of that year. Everything seemed so in order and almost magical that the experience with GRID in LA would happen before my departure for Córcega.

Suddenly I found myself packing my bag to go to L.A., time passes quickly when you’re chasing after and reaching goals. Suddenly I was seated on the plane, the sun through the airplane window was like a smile from the universe acknowledging the destination I was headed to and my purpose. I still remember that moment today.

My time in L.A. was marvelous, I spent one day with each team in the GRID L.A. office to understand their processes since I was only there for a week. I was so impressed with things that I hadn’t imagined, like understanding the staff’s motivations, these crazy ideas that cross borders without the need for papers and settle in the hearts and heads of many people in a magical way. It’s exciting to see the social intersection that the organization has with people with a difficult past, to see this philosophy that the organization has of providing a second chance to people who deserve it, because we shouldn’t deny a second chance to someone in this life, we should extend our hand instead of showing the way. I shared smiles, knowledge and good moments with the whole team who were so warm with me in such a natural manner. It was motivating as well to see the benefits of the policies and legislation of the state regarding renewable energy, seeing how the taxes are collected from companies that pollute to fund assistance to others. All of this in addition to the safety practices implemented according to OSHA which was very enriching and filled me with ideas of how Nicaragua and other developing countries could arrive at a good government management. It was also impressive to see the difference in poverty when I went to the sites where solar systems were installed. It’s different from the poverty in Nicaragua and Latin America in general, however, it’s poverty that fits within a first world economic system and must be helped in the same way. Without a doubt, traveling and sharing expands your mental borders.

I feel very motivated to stay involved in renewable energy, especially solar, to promote development and care for the environment in my country and in the countries that need it, I believe that we must break down borders starting with our way of thinking, seeing the borders as the invisible things that they really are, we are all human beings that share the same home, a single planet that we must take care of.