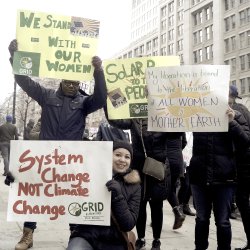 The ruling isn’t final yet, but this decision would take away reproductive justice for millions of Americans—especially underserved communities and communities of color.

Removing abortion rights hurts the communities we serve. Not only that, but gender equality, sexual and reproductive health and rights, and climate change issues are inextricably linked.

Bodily autonomy and environmental justice are two sides of the same coin.

People of color face historical health discrepancies and are less likely to be insured. Research shows that restrictive abortion policies lead to more negative outcomes for Black women than the average population.

The decision to overrule Roe v. Wade would have outsized impacts on the District of Columbia, which still lacks representation granted by statehood. If constitutional protections of abortion rights are removed, District residents may be subject to a final decision by Congress—where they have no voting representation.

Revoking abortion rights could pave the way towards removing similar Court protections for the right to marriage equality, contraception, medical autonomy, and more.

"Simply put, the Court’s pulling out the thread of abortion rights threatens to unravel a fabric of rights that has been protected for decades. These are fundamental aspects of liberty that warrant constitutional protection."
— Erwin Chemerinsky, Dean and the Jesse H. Choper Distinguished Professor of Law, University of California, Berkeley School of Law

A groundswell of support is needed. You can make a difference in the fight for justice. Here’s how:

Each of us has the ability to make our world more just, more equitable, and better for families in our community. Thank you for doing your part!