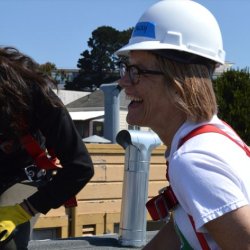 Welcome to the next installment of our Staff Spotlight feature, where we share a brief interview to introduce you to some of our amazing staff members here at GRID Bay Area! This month we'd like to introduce Becky Sorensen, our GRID Bay Area SolarCorps Construction Fellow. With a background in computer science and organizational behavior. Becky worked in systems consulting, marketing operations, and was even a yoga instructor for a time before deciding to make a transition into solar construction.

I started volunteering for GRID at the end of 2016 and after interning in a few different departments, I became a SolarCorps Construction Fellow in August of 2017.

What GRID value most resonates with you?

Positive Action, doing something meaningful and making a difference

What is your favorite GRID moment?

My favorite GRID moment was after Solarthon because Dorothy, the homeowner whose roof I worked on, was so engaged and so excited about getting solar and the prospect of getting her neighbors involved as well.  It was amazing to see her hug all the volunteers.  After the install, I stayed and talked to her after everyone was gone just listening to her story, how her neighborhood was changing and how thrilled she was to have found GRID.  She happened to be the homeowner that got up and spoke at Solarthon and I told her how impressed I was that she could speak so easily in front of a crowd of 300+ people and not seem nervous at all.  She laughed and said she was nervous, but she'd been a Sunday school teacher so she just viewed the crowd as a really big Sunday school class.  We both laughed at that and agreed it had been a wonderful day.

I've traveled to over 30 countries and am a certified scuba diver. Most recently, I  was diving  in Bali.