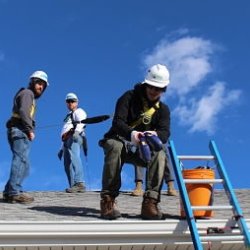 GRID Alternatives Colorado (GRID CO) has been working with the City of Thornton to provide free solar systems to income-eligible homeowners through Community Development Block Grant (CDBG) programs. One of GRID CO’s outreach coordinators, Mikkela Blanton, caught up with Thornton resident James*, a former GRID CO client, to talk about his experience with GRID CO and solar energy.

James is a senior approaching a fixed-income reality, and as such, he can certainly appreciate the energy cost savings that a GRID CO solar installation can provide. “In addition to the financial benefit,” James explained, “there is a psychological benefit to being given the opportunity to be part of a collaboration of people passionate about the environment (GRID CO), a community acknowledging the need (the City of Thornton), and residents who are able to help the planet in a small way that their resources might not normally allow.”

As the primary caregiver for an aging parent during the COVID-19 crisis, James says that now more than ever, he’s appreciative of the solar panels. Not only are the energy bills lower than they were before going solar, but “the fact that I don’t have to worry about them at all is still very nice, yet they are still doing what they do. After the install was completed, it’s been very maintenance-free, worry-free. I don’t have to think about it, to tell you the truth. So that’s been a blessing,” said James.

The conversation turned to climate change and its impacts, both globally and at the local level. “I guarantee that we’re all affected,” James said, speaking of climate change. “Just the nasty two summers we’ve had in Colorado with the smoke—this is an immediate sign we’re impacted by climate change. The more that we destroy the earth, the more the earth isn’t doing us any favors.”

James isn’t just promoting renewable energy through his own solar system; he’s also talking to friends and neighbors about it. “I was able to talk a neighbor into getting solar with GRID CO,” James told Blanton, “but what I really hope is that GRID CO can maybe expand out to other surrounding places, such as Utah and Wyoming. I would reach out to people I know there and pound them to do this!”

Speaking of getting solar installed by GRID CO, Blanton asked James what he would say to someone on the fence about going solar with GRID CO. He gave a glowing review of the process:

“I don’t know why in the world a low-income family wouldn’t want to attempt this,” he declared, referring to the free solar program. “If nothing else, just the investigative process—just having someone come out and take a look at the house and the roof, that alone can give peace of mind. In terms of savings, I can’t imagine why in the long run anybody would have concerns and not be elated to have the opportunity.”

Turning to his experience working with GRID CO, James said that each member of the team he interacted with had a “wonderful, extraordinary, great personality!” “The people with GRID CO were phenomenal,” and the construction crew was “maybe even more meticulous than you would expect,” going to great care with the construction, grounding, and electrical hookups. In short, he couldn’t be more pleased with the process, GRID CO’s team, and his panels.

If you want to learn more about our free solar program and whether you qualify, contact our outreach coordinators directly today or fill out our preliminary application form online.

*Name has been changed to protect the client’s privacy.