From Staten Island to San Diego, NRG Brings It! 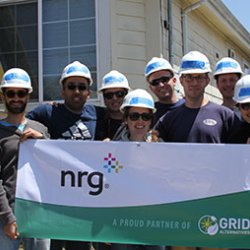 Ahh… the beginning of summer. It’s a time of year most of us look forward to, but with longer days come higher temperatures and that can mean higher electricity bills, a major burden for families on a tight budget. Electricity bills for Ms. Perosi of Staten Island NY range from around $200 in the winter to as high as $600 in the summer, straining her already limited resources. "I wanted to go solar,” said Ms Perosi, “but the prices were astronomical."  All that changed this past May when volunteers from NRG came out with GRID Alternatives to install a 16-panel solar array for Ms. Perosi, bringing her average monthly cost down to around $33.  Click here for local news coverage.   She was one of three families to get relief thanks to NRG volunteers this spring.

As part of their Day of Giving campaign, a week-long, community-based event where more than 1,500 employees volunteered with over 70 non-profits across the country, NRG also installed for families in Oakland and San Diego. “We serve the causes that our workforce feels passionately about,” says Jennifer Brunelle, Director of NRG Global Giving. The passion was obvious as the employees worked hard alongside our crew to bring solar to the Connelly and Toles-William families. “When I went outside this morning, I couldn't believe all the people that showed up to help put solar on my home,” said Mr.Connelly, a long-time resident of San Diego.

A big thank you to NRG from GRID and the families we serve for supporting us since 2013!