GRID and Bill Clinton Stand With Solar for Tribal Communities 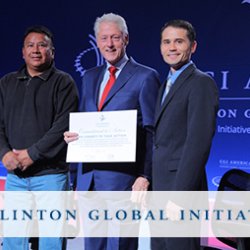 This week in Denver, Stan Greschner, GRID's VP of Market Development, had the honor of sharing the stage with former President Bill Clinton and Navajo leader Jonathan Yazzie at a meeting of the Clinton Global Initiative (CGI). At the event, GRID Alternatives made a commitment to provide solar power and solar job training to two key tribal communities as part of our national Tribal Program: The Shinnecock Indian Nation on Long Island and the Navajo Nation in the American Southwest.

Nearly 30 percent of Native Americans lived in poverty in 2013, the highest rate of any ethnic group and nearly double the national average. Many of the tribes with the greatest needs are located on remote, rural reservations that are well beyond a reasonable driving distance from a metropolitan areas. In the Navajo Nation, 16,000 families do not have access to electricity. 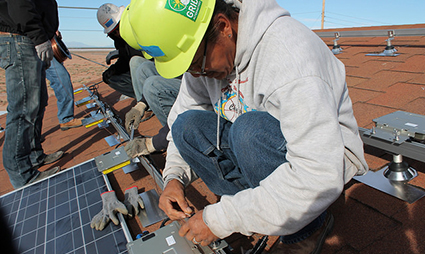 On the Shinnecock Indian Nation on Long Island (NY), over half of the families on the reservation live below the poverty level. They also suffered enormous damage from Superstorm Sandy. GRID will be working with the tribe to install rooftop solar for 50 tribal member homeowners over the next three years, and a battery backup system on the Shinnecock Community Center.

These projects are among several GRID is doing in Tribal communities across the United States this year, helping these communities make the transition to clean energy and access the solar job market. Thank you to CGI for inviting us to come and showcase our work! Visit our Tribal Program page to learn more and the Clinton Global Initiative official release to learn about all the Commitments to Action this year.