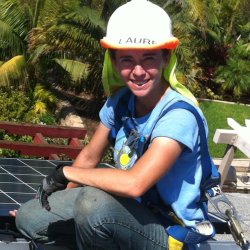 “I am kind of disappointed that I end up being the default employee that gets the spotlight for women in construction just because we don’t have a larger pool to choose from.” This was Laura Galavis’ wonderfully frank response to being asked about a highlight for this year’s Women in Construction week.

At GRID Alternatives San Diego, our construction team of ten members is small but mighty, covering installations and projects for the entire County of San Diego.  Of our construction team members, there are currently two women.  One of those women is Laura Galavis.  When we reached out to her about being featured in this year’s celebration of women in construction, she expressed mixed emotions - namely, gratitude and fatigue.  To our infinite betterment, she was candid, open, and welcoming.  As a response, this social media team (of three women) decided that instead of a highlight as our standard celebration of Women in Construction week 2023, we would take a deeper dive into the conversation and context around what it really means to discuss Women in Construction as informed by the experience of our very own Ms. Laura Galavis.

BEFORE WE DIVE IN, it is important to recognize that the umbrella of “women” is large.  We would like to be explicit that it is inclusive of our trans sisters as well, and that women come from many different backgrounds and lived experiences that cannot (and should not) be lumped into one big pile of experiences, obstacles, and privileges.  That said, we are hoping to reflect upon the larger context of what shared experience may exist through the eyes of one of the amazing women who resides under the roof of this amorphous umbrella that is womanhood.

The history of women in construction is complicated - a beautiful shade of gray.  It is full of pride, and innovation as well as mistreatment, underpay, and discrimination.  Even today, only 11% of construction industry workers are women, according to the U.S. Bureau of Labor Statistics.

When I sat down with Laura to discuss her experiences as a woman in construction, even framed within the context of the accompanying systemic challenges, she spoke from a place rooted in joy.  The pride and satisfaction she receives from hands-on work that allows her to continually skill-build and work towards the mastery of a trade was present in every part of our conversation.  First and foremost, she spoke of her love for a job that allowed her to stay active, work in the beautiful outdoors, and help the community and environment.

Working in construction with GRID also allows her to participate in a larger push for the advancement of women’s rights and equal treatment, to “give the sample rather than the speech,” as she put it.  Some of her favorite parts of the job?  She gets to meet and hold space for other women in the field that are interested in construction but never knew they could be a part of it.  If anything, she feels her impact gets watered down in an office more than in the field.  She describes the incredulous smiles and looks she receives from some of the homeowners who benefit from our programs who appear shocked, delighted, or both by this “tiny woman” that is able to install their battery.   Laura chuckled when telling me this and said “Yes, we can!!  Of course we can!”

So, in her opinion, why is such a small percentage of our construction team women?  Her immediate response was that it “starts very early - when they give you a Barbie instead of Legos.”  Simply put, the options presented to men and to people of other genders as viable are very different starting from a very young age.  There is an expectation of what society says is normal, and as an example, she herself didn’t even consider a career in construction growing up.  It wasn’t until she learned about the possibilities within her chosen industry of solar that she realized it was what she wanted to do.  Once she started looking for doors into the construction field though, she has always found one open.

In speaking to some of the historical difficulties women in construction have faced, she highlighted the methods of status quo change - citing affinity groups for women in construction within organizations as a method of building strength and numbers.  She also advised taking advantage of the internet and the access to other like minded people and organizations it gives you.  For example, local meetup groups, webinars, and unions. “We may be alone on the day to day if we are not working directly with another woman, but we are not alone in the industry.”

Her advice for growing the number of women in construction is straightforward:
“If we raise our children to find what makes them happy versus what society says they will be happy with, we will have a lot more girls playing with legos.”

The itinerant solar geek, Laura Galavis fell in love with photovoltaics (PV) at 16 when she saw her first Casio solar calculator.  Finding out how to turn that love into a profession took her a lot longer. Born and raised in “oil-rich” Venezuela, Laura opted to pursue a bachelor’s degree in mechanical engineering that, as Jigar Shaw puts it, “is like the liberal arts of engineering.” After graduating in 2008, she applied to the five solar companies that existed in her country at the time. Though none of those attempts were successful, she sought out internships, continuing education classes and read a lot of PV magazines. During this time, her jobs ranged from engineering consultant to nanny to medical interpreter. She relocated to the United States in 2009.
At the beginning of 2014, she used vacation time from her job at Cintas to volunteer with GRID Alternatives. Being on the roof installing solar panels inspired her to immediately transition to a career in PV construction. Laura took the plunge and promptly gave her 2 months notice. She was hired as a SolarCorp fellow by GRID Alternatives San Diego before continuing her journey working with Third Sun Solar, Enphase and Sunrun. Earlier this year, she returned to GRID to continue training the next generation of installers, and we’re thrilled to have her!