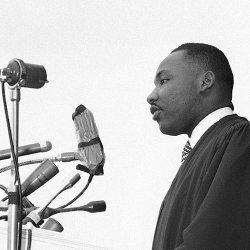 In 1957—five years before his “I Have a Dream” speech—Dr. Martin Luther King, Jr. spoke from the steps of the Lincoln Memorial for the first time. That day, he demanded the federal government protect voting rights for Black Americans in what came to be known as the “Give Us the Ballot” speech:

“The denial of this sacred right is a tragic betrayal of the highest mandates of our democratic tradition. And so our most urgent request to the president of the United States and every member of Congress is to give us the right to vote. Give us the ballot, and we will no longer have to worry the federal government about our basic rights.”
— Dr. Martin Luther King, Jr.

Sixty-five years later, the struggle continues. In 2021, 19 states enacted 34 laws to restrict voting access, according to the Brennan Center. These laws ranged from making it harder to vote by mail, to adding voter ID requirements, to limiting measures that promote voting access.

In almost every case, laws that restrict voting access disproportionally impact voters of color. In one example, a study published in 2020 looked at county turnout data and found “additional empirical evidence that strict voter ID laws appear to discriminate.” For another, laws that make it illegal to distribute food and water to voters waiting in line have a greater impact on voters of color, who are more likely to wait in long voting lines.

“So long as I do not firmly and irrevocably possess the right to vote I do not possess myself. I cannot make up my mind — it is made up for me. I cannot live as a democratic citizen, observing the laws I have helped to enact — I can only submit to the edict of others.”
— Dr. Martin Luther King, Jr.

Communities of color, low-income communities, and other marginalized communities contribute the least to climate change. Yet they suffer from its effects the most. When their voting rights are diminished, they lose the ability to change or deny environmental policies that increase inequity, jeopardize their health, and threaten their homes and communities.

“The fight to restore and protect voting rights in the U.S. is directly linked to the ongoing struggle for climate and environmental justice.”
— Clara Walker, Director of Environmental Justice and Equity at World Resources Institute

Research shows that Black Americans, along with Hispanic and Latino Americans, are more concerned about climate change than White Americans. Further, out of all demographics, Black voters were most likely to say that “climate change and the environment were either ‘very or ‘somewhat important.’”

Solar panels, carbon credits, wind turbines, and electric vehicles are all important tools for achieving environmental justice (among countless others). Greatest of all, though, is the ballot box—where all Americans should have the power to make up their own mind and not have it made up for them.

To achieve environmental and social justice, all Black Americans must have the firm and irrevocable right to vote.

Read Dr. King’s full “Give Us the Ballot” speech.

Read part one in our Black History Month series, which focused on the historical diminishing of Black history.

We provide no-cost solar installations and job training to advance environmental justice through renewable energy. Support us by donating today!