Black History Month: Why We Fight for Environmental Justice 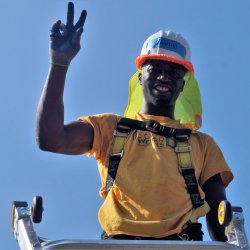 The New York Times claims that Joe Biden is the first president to "elevate environmental justice." Today’s progress, however, is the continuation of a journey that began in 1979.

That year, attorney Linda McKeever Bullard wrote the opening lines of an important chapter in Black history. She brought a lawsuit against Southwestern Waste Management for planning to put a landfill in a Houston neighborhood where 82% of the residents were Black. Following the lawsuit, her husband, Robert Bullard, led a landmark study that showed a disproportionate amount of solid waste sites were located in Black neighborhoods in Houston.

Those actions were among the first of the environmental justice movement. Decades later, thanks to his ongoing scientific contributions to the movement, Robert Bullard is now considered the “Father of Environmental Justice.”

“Environmental justice is nothing more than this whole principle: People have the right to a clean, healthy, sustainable environment without regard to race, color, national origin. It’s just that simple.”
— Dr. Robert Bullard, the “Father of Environmental Justice”

It’s necessary to fight for environmental justice because the playing field is not level. Historically racist and segregationist practices, such as redlining, created different environments for different populations.

The legacy of redlining and segregation continues to impact millions of communities of color today. Redlined neighborhoods often lack tree cover—due to years of neglected landscaping investment—have fewer protections against floods, and are closer to sources of pollution.

A study by NAACP and the Clean Air Task Force in 2017 found that Black Americans were 75% more likely to live in areas next to industrial facilities. These facilities release toxic pollutants that have been linked to brain damage, birth defects, and cancer.

“These findings confirm what most grassroots environmental justice leaders have known for decades: Whites are dumping their pollution on poor people and people of color.”
— Dr. Robert Bullard, the “Father of Environmental Justice”

The problems are made worse by the fact that Black communities—as well as other minority communities—have less access to renewable energy jobs and benefits. Even when accounting for racial differences in household income, Black- and Hispanic-majority communities have much fewer solar installations than diverse communities or white communities.

Renewable energy can be a turning point in the fight for environmental justice by lowering emissions, reducing energy costs, and providing opportunities for careers in a growing industry. That reality drives GRID Mid-Atlantic's work.

While the Biden administration continues to push for environmental justice measures, it recently announced it would not be using race to determine where to focus its efforts. This decision could result in fewer legal challenges, but it also undercuts a key element of environmental justice.

The science is clear: Environmental justice is tied to racial justice.

Read Part 1 in our Black History Month series, which focused on the historical diminishing of Black history.

Read Part 2 the series, which looked at the impact of voting rights on environmental justice.

We provide no-cost solar installations and job training to advance environmental justice through renewable energy. Support us by donating today!