The First Step on a New Career Path 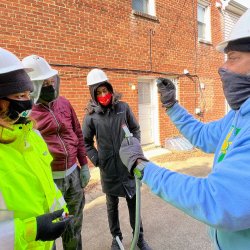 After eight years living in Georgia, Lillian had a decision to make when returning to her hometown of D.C. Where did she want to direct her career path?

“I chose solar because it isn’t a traditional career path for women, and I’m interested in improving the Earth,” she said.

Lillian, who is from Southeast D.C., met with the Department of Employment Services. It gave her multiple options for training programs. After hearing about Solar Works DC, she knew she didn’t want to do anything else.

“I was adamant this was the program I wanted to participate in,” she said. “I told them, ‘I want to do solar work.’”

Lillian told this story during a break on her first day at a real-world solar installation. The project called for 19 panels on a home in Brookland, a neighborhood in Northeast D.C. Lillian’s first task was helping to install conduit.

Conduit is critical for solar installations. It protects the wires carrying power from the solar panels on the roof to the various electrical panels on the side of the home. Lillian and three other trainees received lessons on how to connect conduit pieces and bend them to ensure they stay flush with the exterior wall.

At the same time, two of her fellow trainees were on the roof. A drill whirred above as they helped set foundations for the racking that would eventually hold solar panels.

“In a second I’m going up there on the roof,” Lillian said. “We rotate, so they’re coming down and I’ll be heading up.”

Hands-on training is a feature of the Solar Works DC program. Trainees install working systems for homeowners in the community, helping them to reduce their energy costs and lower emissions.

By the time they arrived in Brookland, the trainees had received two weeks of virtual training. Those sessions introduced many trainees to solar for the first time. They explained electrical concepts, how solar arrays work, and the components of the system.

“I was even more excited when we started doing things hands-on and actually seeing it,” Lillian said. “I was wondering, ‘How are we going to bend this conduit?’ Now it’s all starting to come together.”

Lillian and her fellow trainees in the Solar Works DC cohort will participate in a number of installations during the 12-week program. They’ll also receive important lessons on career soft skills, like resume building. The program also includes case management for trainees experiencing homelessness or other needs.

Read more about the Solar Works DC program, including how to apply.

GRID Mid-Atlantic implements the Solar Works DC program, which is a part of the Department of Energy and Environment’s Solar for All initiative.