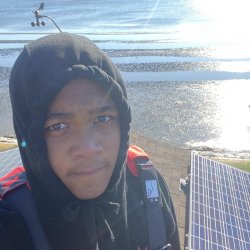 When Jahlil Wormley graduated high school, he didn’t know what direction to take his career. But that would soon be the least of his worries.

Over the next few months, he’d also experience homelessness and gun violence. After being shot, he was told he’d likely never walk again—if he survived.

“I almost lost my life,” he said. “I was supposed to be paralyzed or dead. Those were my two options.”

Two years later, Jahlil walks just fine. He lives in his own apartment. And at Tesla Energy in Prince George’s County, Maryland, he gets paid $20 per hour in his first full-time job out of high school.

He credits the Solar Works DC training program for helping to get his life on track.

“You just gotta want it”

Jahlil was just graduating high school when GRID Mid-Atlantic arrived at his mother’s house to install solar on her roof. Jahlil’s mother saw someone around his age participating in the installation as part of the Solar Works DC training program. She told her son, “You can do that.”

The message stuck. Jahlil was interested and called GRID Mid-Atlantic Executive Director Elijah Perry for more information about the program.

“I remember Elijah saying, ‘You just gotta want it. Seven weeks—that ain’t nothing.’ He started talking about the certificates I’d earn, what people get paid in solar… I was like, I’m liking what I’m hearing,” Jahlil said.

“He didn’t have any real support,” Elijah said. “He was homeless. I remember him coming to me saying he was looking for someone to help him navigate through life and become a man. For him to have that tenacity and drive, it left a lasting impact on me.”

Dead or paralyzed…what about Option 3?

Hands-on training is a key aspect of the Solar Works DC program. Trainees learn during real-world installations, where they put up rails, align conduit, connect solar panels, and more.

But before he made it up on the roof, Jahlil nearly died from gun violence. The bullet entered through his neck and exited out of his back.

Jahlil’s determination overcame his diagnosis. He relearned how to walk during grueling physical therapy sessions. In the meantime, he attended Solar Works DC classes on his computer until he was back on his feet.

He regained the ability to walk while still in the program. But when he attended installs, his legs would shake due to nerve damage left by the bullet wound.

“People were asking me, ‘You scared? Your leg’s shaking.’ I had nerve damage. It used to be bad,” Jahlil said.

“He wasn’t making excuses for anything. He really took the opportunity of the program and made the best out of it,” Elijah said. “He was awesome on the roof. He was awesome in class. He wanted to take care of himself and his family.”

GRID Mid-Atlantic partners with Lasting Change Life Coaching to provide additional services outside the classroom. This includes support for trainees experiencing difficulties with mental health, hunger, homelessness, or other issues that can impact their personal growth.

Jahlil experienced homelessness as a Solar Works DC trainee, though he was hesitant to mention it. Eventually, he confided in Linda Stroman, who helped him acquire a $5,000 grant from Martha’s Table for living expenses. Shortly after, Jahlil found housing through Sasha Bruce Youthwork.

Linda also helped Jahlil acquire a birth certificate and ID, which he didn’t have before the program.

“Jahlil is a very humble young man,” Linda said. “His self-determination was evident during his journey through the Solar Works DC program. He never complained to me about anything. He just wanted to be pointed in the right direction.”

After graduating from Solar Works DC, Jahlil’s new resume and experience installing solar earned an interview at Tesla Energy. He was offered a starting role at $20 per hour and has an opportunity for a raise every six months.

His story still inspires the staff at GRID Mid-Atlantic.

“During a time when everyone needed hope and inspiration, including me, Jahlil’s tenacity and drive provided that,” Elijah said. “He’s the reason why we do the work that we do. Our purpose is to support the community.”

Solar Works DC is a part of Solar for All, a Department of Energy and Environment (DOEE) program. Solar for All seeks to provide the benefits of solar electricity to 100,000 low-income households and reduce their energy bills by 50% by 2032. The program, which was established by the Renewable Portfolio Standard (RPS) Expansion Amendment Act of 2016, is funded by the Renewable Energy Development Fund (REDF).