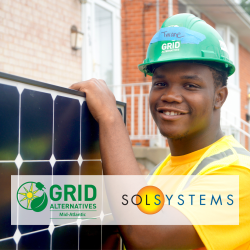 This month, we’re highlighting the amazing support that we get from Sol Systems, which has been an outstanding corporate partner of GRID Mid-Atlantic.

Adaora Ifebigh, the Director of Impact at Sol Systems, can sum up her vision of a clean energy transition in one line: We’re not leaving anyone behind.

That’s an outlook GRID Mid-Atlantic is more than willing to align with.

“It might seem too simple,” Ifebigh says, “but for me, the best thing is ensuring everyone—not just the people who can afford it, not just people who live in certain areas—is a part of the clean energy transition.”

In 2021, GRID Mid-Atlantic and Sol Systems mutually agreed to expand the partnership. As part of the renewed relationship, Sol Systems has provided generous support for GRID Mid-Atlantic’s workforce initiatives—sponsoring career skills “bootcamps” for recent program graduates, helping curate professional services development, and offering insight to trainees on the numerous career pathways that exist in the solar industry beyond installation.

Additionally, Sol Systems and GRID Mid-Atlantic continue to explore new partnership opportunities for the future, such as financing critical home repairs before solar installations. This type of partnership would address issues such as old roofs or inaccessible service panels—which are common in environmental justice communities—that often serve as a barrier to receiving solar.

Ifebigh, who has worked in the renewable energy space for more than a decade, has been instrumental in expanding the partnership. For the last five years, she’s narrowed her focus to increasing renewable energy access within underserved urban and rural communities.

In 2019, Ifebigh drove the launch of NRECA’s Advancing Energy Access for All program. The initiative supports electric cooperatives across the country, helping the co-ops serve as resource providers in communities that face steep barriers to deploy and utilize renewable energy.

“When sometimes I wonder about the difference we’re making, I talk to Elijah (Perry, GRID Mid-Atlantic Executive Director). He puts it all into perspective,” Ifebigh says. “He believes firmly that the little things we do have a ripple effect. Just look at Jahlil Wormley’s story. Programs like Solar Works DC make a real difference in people’s lives.”

GRID Mid-Atlantic is grateful for Sol Systems’ support of our programs and our mission. Together, we’re working to create a just and equitable clean energy transition.